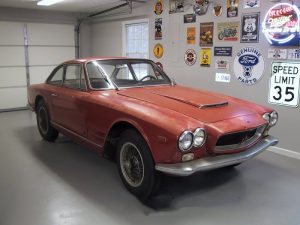 Following the success of the 3500GT Vignale spyder, Maserati went back to Carrozzeria Vignale for a 2+2 coupe based on the shorter wheel base. Penned by Giovanni Michelotti, the 3500 GTIS, or Sebring as it was also named, was introduced at the Geneva car show of 1962.

Mechanically the Sebring is almost identical to the late model 3500GTi. All Sebrings had 4 wheel disc brakes and Lucas fuel injection. Most have a ZF 5-speed gearbox although a few automatics were built. It seems about half the cars came with Borrani wire wheels while the other half had the solid Borrani wheels. The Sebring was designed at a time when 4 headlights were common.

The first series Sebrings were built from 1962 through 1965. All had 3.5 liter engines, and had low side vents and a dash reminiscent of a 3500GTi. The second series was built in 1965 and 1966. Three different engine displacements were offered (3.5, 3.7 and 4.0) with 3.7 liters being the most common. The series two cars look very similar at first glance but very few body panels or trim parts are interchangeable with the earlier cars. The interior was completely redesigned and is considered one of the most attractive of all Maserati GT cars. The row of toggle switches (similar to a Jaguar XKE) and the fake air conditioner vents give the dash layout a very distinctive look. An optional air conditioner replaced the fake vents.

A total of 598 Sebrings were built