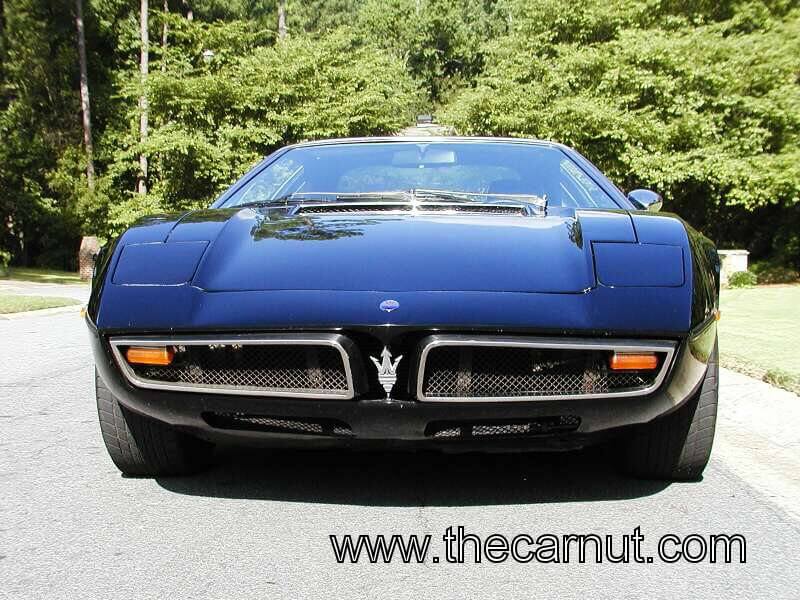 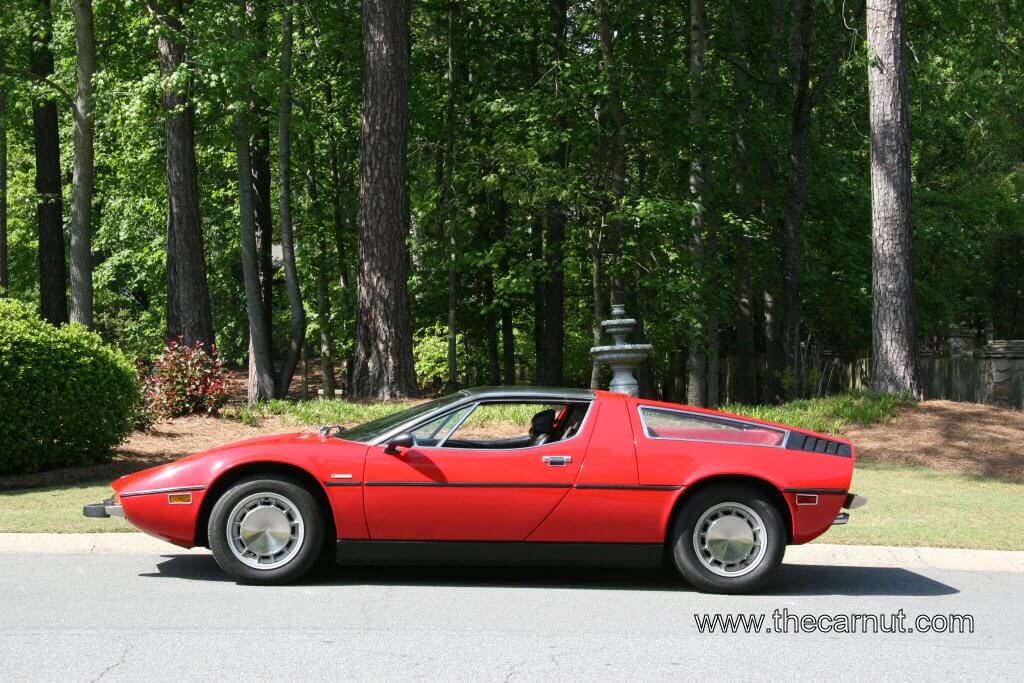 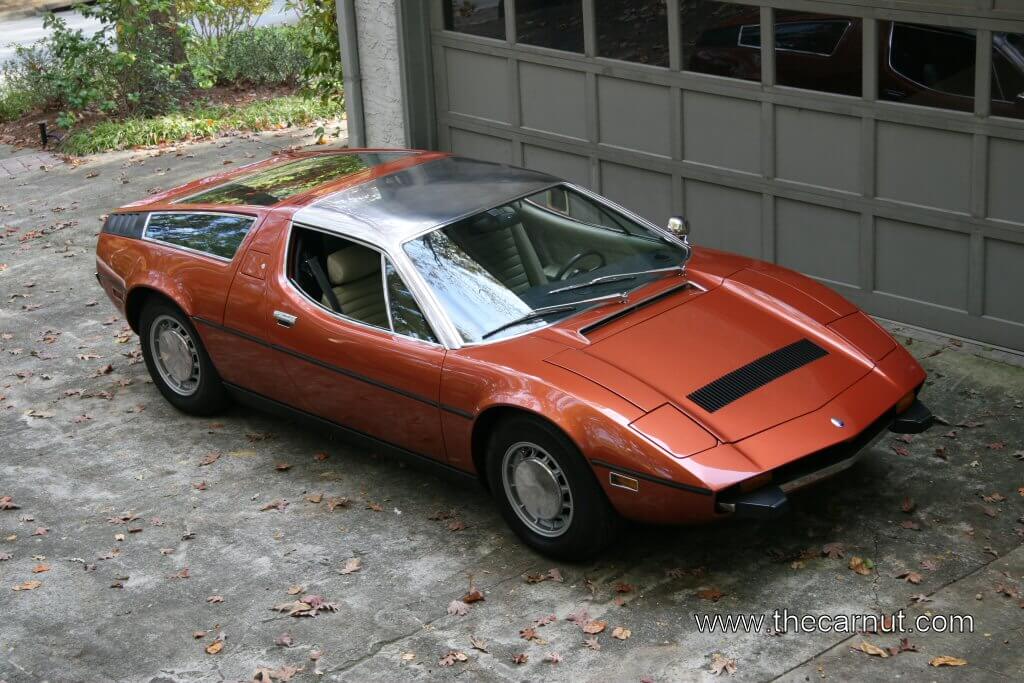 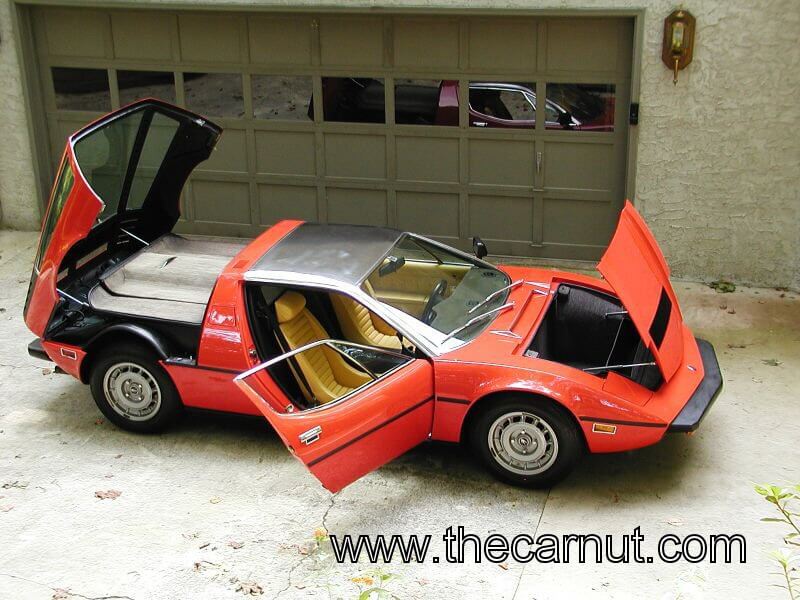 The Bora was introduced at the 1971 Geneva show and it was Maserati’s entry into the mid-engine supercar market. Penned by the newly formed Ital Design studio of Giorgetto Giugiaro, who also designed the Ghibli and the Iso Grifo; the Bora has the wedge shape look found in similar mid-engine cars of the early 1970’s, such as the Ferrari 512BB and the Lotus Esprit.

The Bora was introduced in an era when the French company Citroen owned a majority stake in Maserati. For Citroen the marriage with Maserati presented itself with the opportunity to boost its reputation in the car world by associating itself with a famous Italian marquee. The association would start by creating a world class, no expensive spared, exotic car in which some of Citroen’s innovations could be displayed. That was the role of the Bora. It uses the by now well-proven Maserati V8 engine, in both 4.7 and 4.9 liter form. The interior design is pure Italian with one of the most attractive set of gauges ever laid out on a car. The seats are very unique and extremely comfortable … they look and feel more like lounge chars than car seats. At first look they would not appear to be that comfortable … but just sit in one and you will know what I mean.

Speaking of seats, they do not move forward or backwards. Instead they hydraulically move up and down, and the pedal assembly adjusts to the driver by moving hydraulically in and out. It is rather cool feature and is certain to impress your friends and neighbors.

Mid-engine cars tend to have cramped interiors, no luggage room and are noise inside. The Bora breaks that mold. Its interior is nice and comfortable, even for tall drivers. The front trunk space is deep with plenty of room. This is unlike a Ferrari 308 in which the "trunk space" is occupied by the spare tire. Best of all, Maserati took the time to make this a true Gran Turismo car by providing plenty of noise barriers, including double pane glass between the cockpit and the engine.

Much negative has been written about the Citroen hydraulic system that controls the seats, and more importantly the brakes. It is true that this system is a bit unconventional and most mechanics have no clue where to start. But it is a very reliable system given that it has had proper maintenance. About every 10 years the two brake accumulators should be recharged with Nitrogen and the main accumulator replaced. There are folks that provide this service at a reasonable cost. If the accumulators are not recharged they will eventually fail. Luckily the accumulators can be rebuilt at a reasonable cost. When purchasing a Bora always ask for evidence that the accumulators have been serviced even if everything is working properly. A much more serious problem is when someone does not use the proper LHM “green fluid”, thus contaminating the system. Normal brake fluid is especially detrimental to the Citroen system.

When checking a Bora look for the usual rust areas under the door. Use a flashlight to inspect the storage compartment just behind the driver’s seat. By removing a few panels this will give you access to the back side of the ear quarter panel. Another area to check is the trunk front. Lift the carpeting, which is glued to an aluminum panel. Water tends to trap between this panel and the steel floor. Open and close the engine cover and make sure it fits well as they can be very difficult to fit … and impossible if the car has been in any type of accident. All Bora came with a stainless steel roof, dents on the roof are difficult to fix.

Bora has a tendency to run a bit hotter than most other Maserati. If you live in a hot climate this may not be the car you want to sit in traffic in the middle of the summer. On the other hand it is a perfect Spring, Fall and Winter car … with a very effective heater!

Few changes were done to the Bora over the production years. In late 1973 vents were added to the front hood in an attempt to more effectively more air through the radiator. How well this works has been a subject of discussion amongst Bora owners, some claim that it actually makes matters worst. Personally I doubt the factory would have kept this modification until the end of the Bora’s production if it did not provide some benefits. In either case a car with or without the vents will have similar cooling issues.

The bumpers on US cars saw changes from metal, to metal with rubber tips, and then to full rubber in an effort to meet ever-increasing US requirements. The non-US cars have more attractive metal bumpers. Converting the bumpers of a pre-1975 US Bora car is relatively easy as the US rear bumper is essentially the same as the Euro version and the front bumper
openings need little modifications. Later US cars, with the rubber bumpers, have additional body changes in the rear that make the rear conversion more difficult, but not impossible. Another change occurred in 1975 when the trunks pivot points were moved to the front after several cars trunks blew open at speed. A well adjusted trunk latch on an early car should not pose little danger, but the later style hinges are preferred. .

No Bora was imported into the US in 1976. In 1977 we saw the last of the US legal Bora, they can easily be distinguished by the logoed open wheels; no longer were the moon dish hubcaps used. It is interesting to note that a few of the 1977 titled cars were actually built during 1978 and “sneaked” into the US as 1977. I have owned two 1977 with clear evidence of the car being built during 1978. In one car the windshield had a manufacture date of April 1978 and the wheels had a casting date of March 1978. This probably was Maserati’s way of producing cars and not having to pass the 1978 US DOT/EPA requirements and certification.

The Bora will always be one of the most desirable Maserati production cars. By the end of the production a total of 524 Bora were produced.